Finally, my battery cells arrived. It took much longer than expected due to customs delays. The seller shipped my cells by train from China and did send me a tracking. The cells would enter Europe through the Warsaw train terminal, and once arrived and released by the Polish customs, UPS would ship them from Poland to the Netherlands.
Unfortunately, this took a very long time, but once the UPS tracking was (finally) working I’ve received the cells within a few days.

But this was to be expected. You do save money, but have to order it yourself, have access to the required payment methods, you have to find a reputable seller (some sell refurbished cells), and you need to have the proper tools and knowledge to balance them.

Since I did order bare cells, I had to top-balance them myself in order to get the best performance. The cells can have different SOC levels (State-Of-Charge) and once in series, the cell with the lowest SOC would trigger the BMS to shutdown. By balancing the cells you’re equalizing all cells to be as equally close as possible, thus allowing you to use the most of its capacity. I’d opted for a top-balance, which is the most recommended way of balancing for RV usage.

Basicly: connect all cells in parallel, charge them to 3.65V till the current is (almost) zero and you’re done.
However, this can take a long time, especially if you have big/many cells and/or they are at a low SOC. It all depends on your power supply. Since mine could only deliver 5A.. and each cell is 280Ah, you can do the math: 4×280 / 5 = 224 hours if they were completely flat.
Also, I didn’t want to leave the cells charging unsupervised during top balance, so that wasn’t really an option, even if the cells were at 50% SOC it still would take 100+ hours.

So I connected all cells in series, and hooked up my BMS. I’ve set the high-voltage disconnect to 3.65V and connected my regular 24A charger. Using this method, I could charge much faster (11.6 hours if completely flat). But mine came pretty full, I think somewhere around 75% SOC. So after only a few hours of charge the BMS did shutdown as it should, since 1 cell reached 3.65. Once that was done, the cells were near full.

I rewired the cells in parrallel to do a full top balance. Since the cells were now either full or very close to, it only take a few more hours with my 5A power supply (set to 3.65V) to full charge all cells.

Once that was done, topbalancing was finished and I could start assembling the final battery.

I used concrete forming plywood for the case. Since the cells are aluminium I checked if they were connected to any of the poles, and yes, the outer case was +. Although the cells are covered in a thin foil, I wasn’t very happy to clamp them together, since the protective layer isn’t very thick. To reduce the chance of a short I’ve added some 2mm PVC between the cells (Which I had as leftover from my build).

The cells are clamped using M8 threaded rods, with a big washer and a locking nut on both sides. On the inside, I’ve covered the rods with plastic tubing, used for air pumps in a aquarium.
On one side I have left some space to mount the BMS. I also added a CF8 fuse to the positive terminal and added a main switch on the outside

For the negative pole, it’s connected to the shunt of my Victron BMV. From the shunt, there are 2 wires: 1 thick 50mm2 (0AWG) to my inverter, and a 5AWG to the BMS.

The output of the BMS is connected to my main fuse box, so everything is ran trough the BMS (loads, charger, DC-DC, solar and so on). Only the inverter is bypassing the BMS.
If there is an error, the BMS will shutdown and protect the cells.
I will add a relay to the switch of the inverter, so the relay is released once the BMS shuts down, thus shutting down the inverter as well, without having me to run the huge currents of the inverter through the BMS.
Altough my BMS is capable of handling 120A, I didn’t want to run the inverter, since it requires cooling and generally isn’t really recommended to run a BMS on or near its maximum rating.

The cells came with double busbars and M6 screws, but I’ve seen reports of people stripping the threads in the cells since that’s aluminium, so easy to overtighten.
To prevent this, and have maximum thread available, I’ve cut a M6 threaded rod into small (2.5cm / 1″) pieces and screwed them down to the bottom, making sure all available thread is used. Using lock nuts I connected everything on top. This gave me also plenty of length to work with (the included screws are too short anyway if you want to used double busbars, decent cable lugs and spring washers).
Using a torque wrench, I’ve thightend everything to 7nm, as stated in the datasheet so I should be ok.

Finally, it was time to add the cover. I’ve installed an aluminium air vent in it, and cut a hole to connect the wire from my shunt.
The box is securely fixed to the van using steel angle brackets, so even in case of a crash, it won’t come flying through my van (It does weigh approx 30kg (66lb) or so, so that’s something you need to avoid.

Finally, I had to adjust all chargers to the optimum settings for LiFePO4, so I’ve changed the solar controller, DC-DC charger and regular charger, and it was time to test.
Connected the normal charger to the mains, works. Started the van: DC-DC charger also started working, so I was able to charge 60A in that case (40A DC-DC, 24A mains charger, but I did have lights on so that was about 4A load) 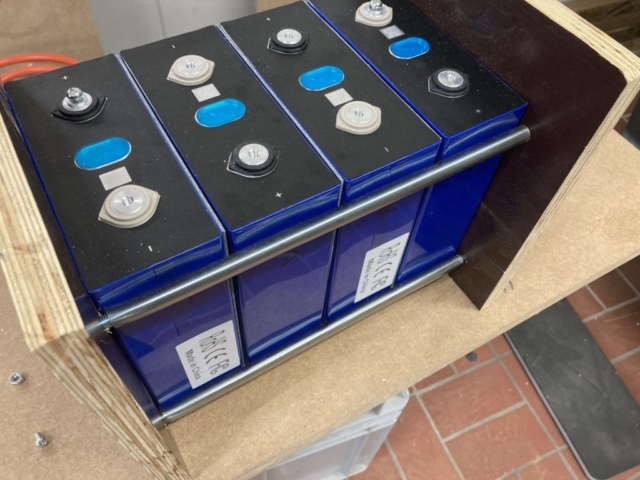 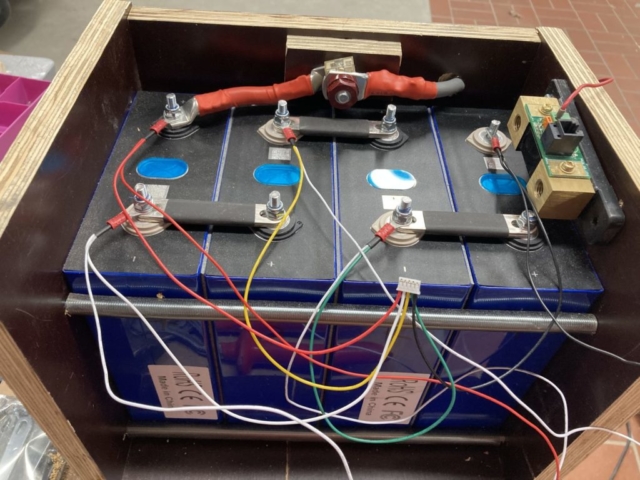 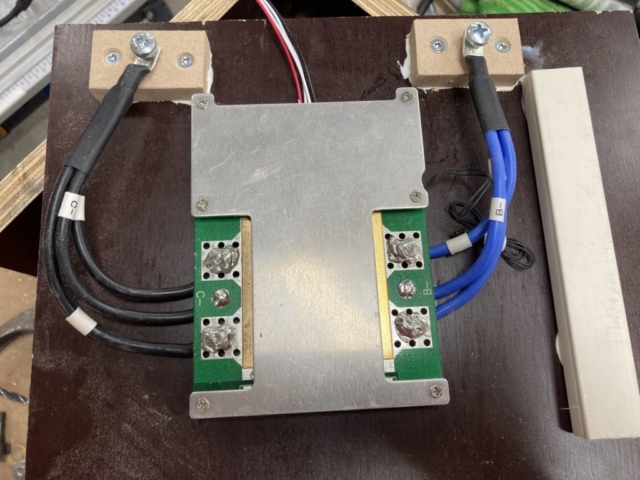 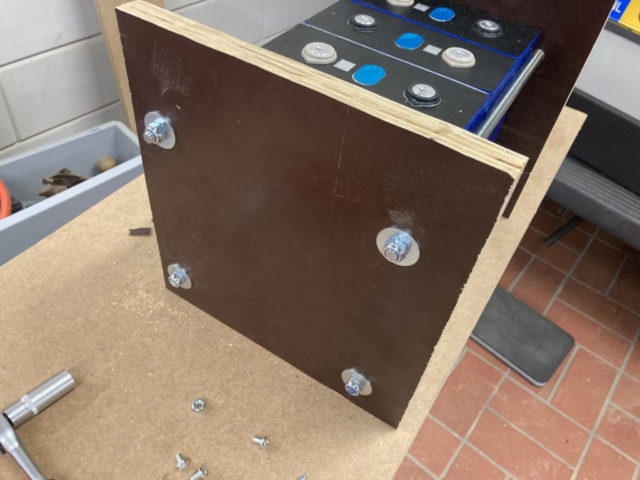 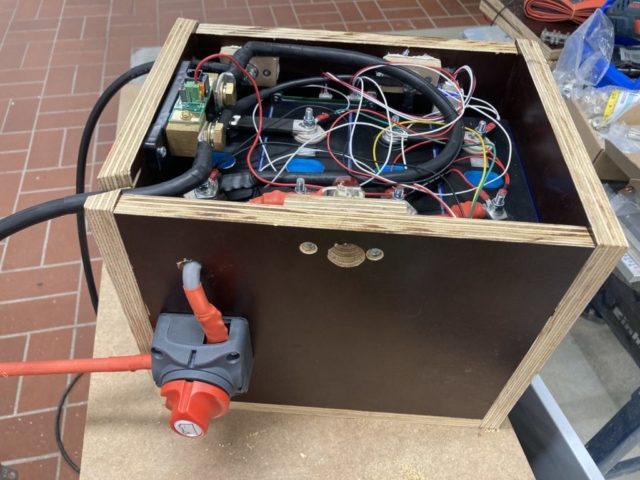 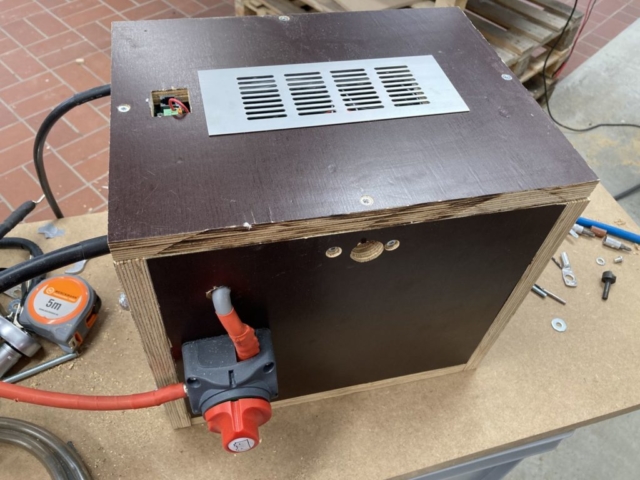 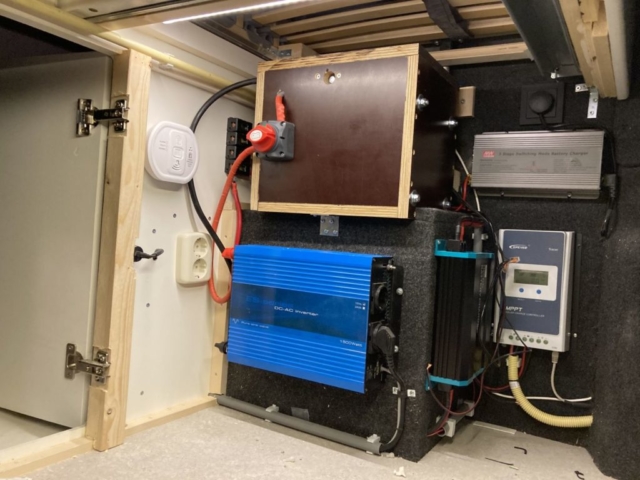 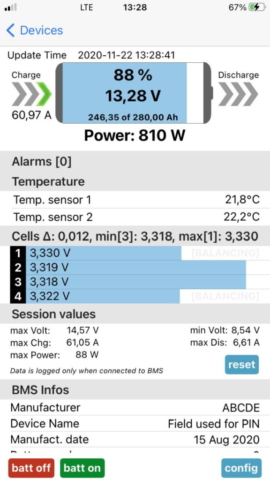 One Reply to “Building the LiFePO4 battery”