Now it was time to do some modifications in the main cabin. I still had to connect the wire from my DC to DC charger to power it on, and had to connect my rearview camera.

Initially, I planned to keep my existing headunit, a simple JVC radio with bluetooth, and use the provided monitor to use with my rearview camera.
However, this monitor was supposed to be mounted on the existing rearview mirror, but my van didn’t have one.. And even if it had, I wasn’t very happy to mount a ‘big’ screen: It would block my vision partially.
Also, I couldn’t find a nice place to mount it on my dash, without compromising my view, and I didn’t like having a ‘unit’ sticking out.

So plans were changed: I needed to get a simple in-dash monitor. Since i’m using my phone for navigation, which works fine for me, I didn’t need a satnav in the dash. Android auto or Apple Carplay was nice to have, but I wasn’t willing to pay for it ;).
That means I only had a few requirements: Bluetooth (I’m using it mainly for streaming, especially when in another country), FM radio (although if reception was poor, I still could use the bluetooth) and an input for the camera.

I also had to get the appropriate mounting brackets: 2 pieces were required: A 2-din frame to support the radio, and a matching faceplate to fit it in a Ducato.
Found those on Amazon for 27 euro in total (Generic 2DIN frame and a CARAV 40-205 frame for the Ducato). Almost as expensive as the radio 😉

Installing it was pretty straightforward, however I had to do some cutting (Had to remove a piece of plastic seperating the existing 1U and the tray above). Also the generic frame wasn’t a very close fit, had to do some adjustents and remove some plastic from the outer frame to fit the tuner, but with some patience and carefull cutting with a knife it wasn’t a major issue.

Wiring was the next challenge.
I did run the wire from the dashcam through the passenger side to the radio. I only had to find a swithed power line to power the cam. Also, the radio required a 12V to automaticly switch the reversing camera. I didn’t run a wire from the back (reversing lights) so I had to find a wire somewhere in the cable loom underneath the dash which was only active when reverse was engaged.
In Fiat E-Learn (the digital documentation of the whole van, including engine and wiring diagrams), I found there is a wire from the reverse switch on the manual transmission to the main wiring cabinet under the dash. (Pin 8 on the E connector of the B002 unit below the drivers side).

So I spliced that wire, and ran an wire to the headunit This wire supplies the reversing signal to the headunit and powers the rearview camera. (So it isn’t powered on always, only when reverse is engaged).
I used the connector which came with the radio to act as a donor for a wire: The original connector of the Ducato didn’t have all pins connected, so I had to add 1 connection for the reverse switching line.

Once the radio was fitted, and the wiring looms and fuse panels were exposed anyway, I was up to the second job: The wire for the DC-DC charger.

I could just connect it to a switched 12V, but that would mean it will charge always when the ignition is on, even without having the engine runnning.
I however wanted to have it only active when the engine is running (so it would draw power from the alternator, instead of draining the starter battery if you’re for example having a small stop without the engine running, but with the key in ignition.

So again, Fiat E-Learn to the resque:
The connection between connector B (D+) of the A010 alternator and pin 25 of connector A of the M001 Body Computer allows the performance of the alternator itself to be diagnosed (in the event of an insufficient recharging level).

Found this wire (it was Green/Brown unlike White/Pink as stated in Elearn, but anyway), so I spliced this wire also, and connected the DC-DC charger and put some heatshrink on. And yes, it was working fine: DC charger only powered on when the engine was running and switched off when I stopped the engine. 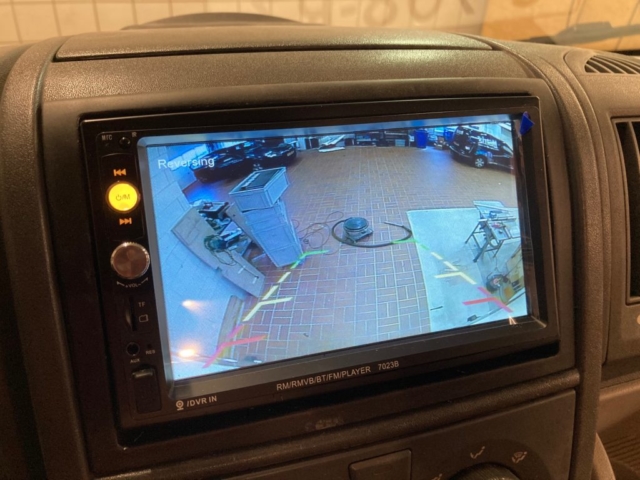 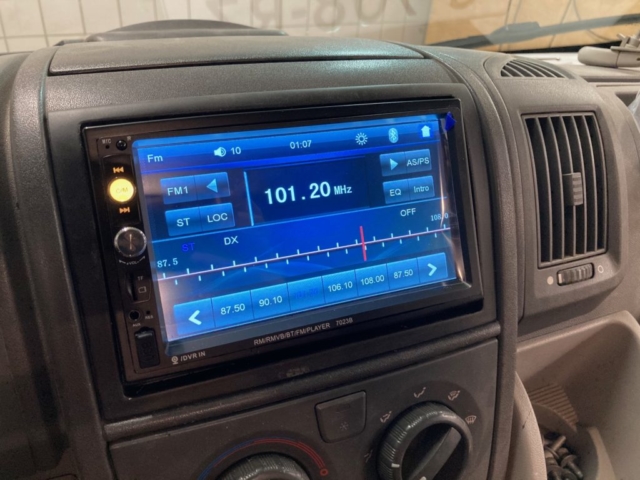 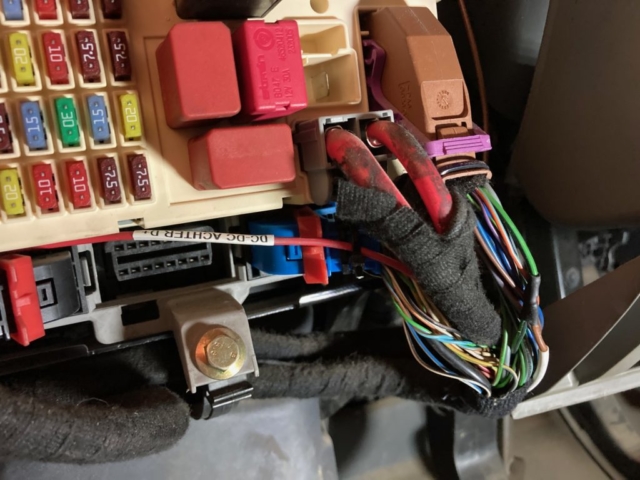 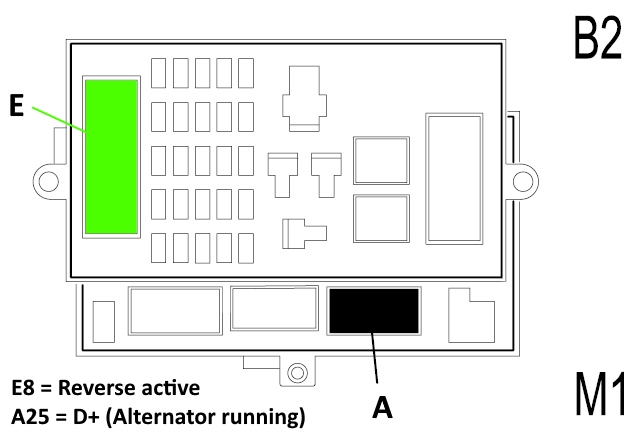